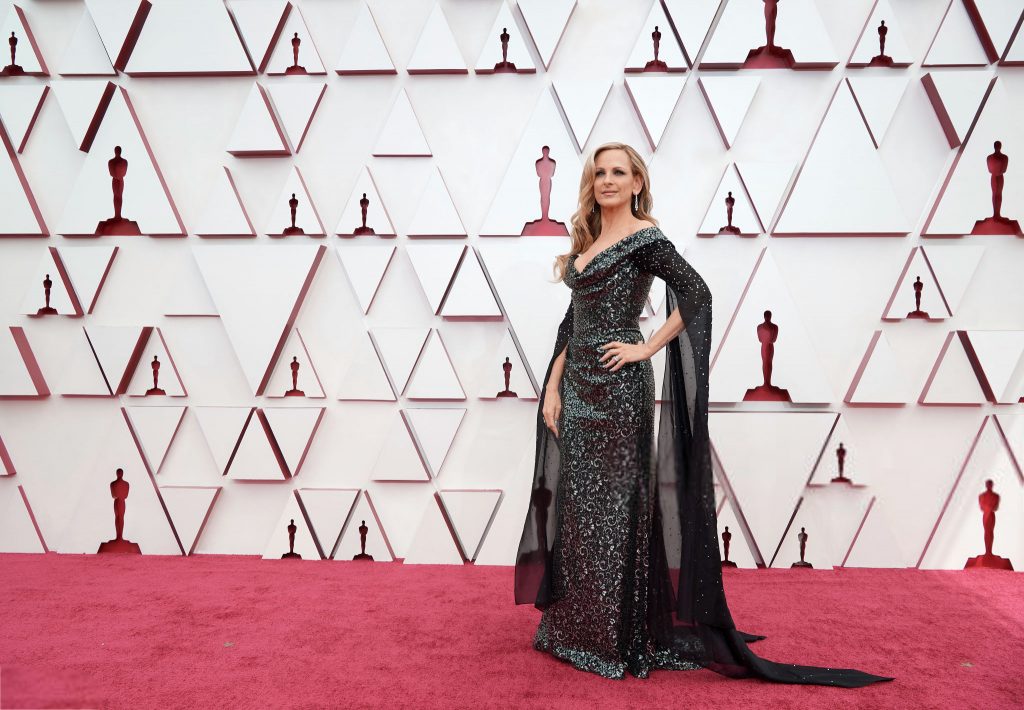 Partnering for a second consecutive year, TENCEL™ eco-couture fabrics were showcased at the 93rd Academy Awards® on this year’s Oscars® presenter Marlee Matlin in partnership with Vivienne Westwood. Marlee Matlin wore an embellished lace gown made with a newly launched RCGD Global™ black vegan textile, made with TENCEL™ Luxe filaments and couture archive fabrics from the Vivienne Westwood Couture Collection. Employing a zero-waste pattern-cutting system, Marlee’s gown is accentuated with Swarovski detailing on the sleeves, made from TENCEL™ Luxe.

In 2020, RCGD Global in partnership with TENCEL™ launched a range of eco-couture materials with the aim of delivering game-changing solutions to the industry. With a lack of ethical choices on the red carpet over the past decade, RCGD have been motivated to bring solutions to the forefront of conversation and action whilst TENCEL™ share a similar vision of positive change, by introducing sustainable alternatives for eco-couture in the industry. The TENCEL™ Luxe filaments are produced using renewable wood source and of 100% botanic origin. To qualify as a RCGD eco-conscious garment, each piece should be made from sustainable materials –  including organic, recycled or repurposed fibers. Other features include using hand-made detailing or incorporating natural dye processing, with a dedicated focus on minimal negative impact on the environment, and environmentally and socially responsible design.

Marlee Matlin is the youngest Academy Award winner for Best Actress in a Leading Role for her work in “Children Of A Lesser God”. Her film CODA just premiered at Sundance and earned 4 awards including Cast, Jury and Audience, as well as setting a new record in its sale to Apple. Marlee is also the executive producer of Oscar Nominated short film “Feeling Through”. Matlin has been instrumental in many activities that are aiding the deaf and hard of hearing communities — This is the first year that ALL academy screeners will have closed captions. She helped get legislation passed that mandated ASL interpreters be present at ALL COVID-19 press conferences. She also organized a PSA that included leaders in the Deaf and Hard of Hearing community that aided Deaf and Hard of Hearing Americans in accessing resources on how to vote in the past elections. Marlee was recently seen as a series regular on the ABC series “Quantico.” Her previous work in “Reasonable Doubts,” nominated her twice for a Golden Globe Award and a People’s choice Award. Since then, she received nominations for four Emmy awards for her appearances on “Seinfeld,” “Picket Fences,” “The Practice,” and “Law and Order: SVU.” Marlee’s other notable TV credits include critically acclaimed series, “West Wing,” “The L Word,” and “Family Guy” just to name a few.

RCGD is a women-led global change-making organisation working from ‘moment’ to movement, bringing sustainability to the forefront of conversation and action within the fashion and apparel industry. Celebrating its 10th year in 2019, the campaign was conceived by Suzy Amis Cameron (actress, environmental advocate, and author of OMD: The Simple, Plant-Based Program to Save Your Health, Save Your Waistline and Save the Planet). When faced with the lack of ethical fashion choices while attending global premieres of husband James Camerons’ ‘Avatar’, Suzy decided that it was time for a change. The RCGD goal is to draw attention to the importance of more sustainable practices in fashion and be part of bringing those solutions to the global market. Suzy created an international design contest, challenging emerging and established designers worldwide to develop sustainable Oscar-worthy gowns, thus fulfilling the RCGD Global criteria to serve the need for more sustainability in the industry. Additionally, focusing on social impact consideration, fair and humane treatment of manufacturers, a clear supply chain, and materials that use a high proportion of recycled and biodegradable materials.

Featuring botanic origin and biodegradable quality, TENCEL™ branded modal and lyocell fibers can enhance the breathability of fabrics and have a minimal static charge when used in fabrics. Fabrics made of TENCEL™ Modal and Lyocell fibers are also gentle on skin with smooth, long-lasting softness, color vibrancy and color retention features. TENCEL™ Lyocell fibers are versatile and can be combined with a wide range of textile fibers to enhance the aesthetics and functionality of fabrics. Through moisture management, TENCEL™ Lyocell fibers can also absorb moisture efficiently. A variant of the Lyocell production process also produces the TENCEL™ Luxe branded lyocell filament yarn, which is an extremely fine filament yarn for luxury fabrics and supremely smooth to the touch. Exhibiting high flexibility, TENCEL™ Modal fibers enhance textiles with a naturally soft quality. Offering endless design possibilities, TENCEL™ Modal fibers can be blended with other fibers and processed using conventional machinery, significantly improving the softness and comfort of fabrics.

Fibers and filaments used under the TENCEL™ brand are derived from certified and controlled sources following the stringent guidelines of the Lenzing Wood and Pulp Policy. Namely, TENCEL™ branded modal and lyocell fibers are produced via environmentally responsible production processes and are compostable and biodegradable, thus can fully revert back to nature. They are designated by the USDA (U.S. Department of Agriculture) BioPreferred® Program. TENCEL™ Luxe is registered by The Vegan society.

Vivienne Westwood began designing in 1971 along with her then partner Malcolm McLaren in London. At the time, they used their shop at 430 Kings Road, London, to showcase their ideas and designs. With their changing ideas of fashion came the change of not only the name of the shop, but also the décor. It was in 1976 when Westwood and McLaren defined the street culture of Punk with Seditionaries. By the end of the seventies, Vivienne Westwood was already considered a symbol of the British avant-garde and for Autumn/Winter 1981, she showed her first catwalk presentation at Olympia in London. Westwood then turned to traditional Savile Row tailoring techniques, using British fabrics and 17th and 18th century art for inspiration.

1989 was the year that Vivienne met Andreas Kronthaler, who would later become her husband and long-time design partner, as well as Creative Director of the brand. In 2004 the Victoria & Albert museum, London, hosted a Vivienne Westwood retrospective exhibition to celebrate her then 34 years in fashion – the largest exhibition ever devoted to a living British fashion designer. In 2006, her contribution to British Fashion was officially recognised when she was appointed Dame of the British Empire by Her Majesty, Queen Elizabeth II, and in 2007 was awarded the ‘Outstanding Achievement in Fashion’ at the British Fashion Awards in London.

Vivienne Westwood is one of the last independent global fashion companies in the world. At times thought provoking, this brand is about more than producing clothes and accessories. Westwood continues to capture the imagination and raise awareness of environmental and human rights issues. With a design record spanning over forty years, Vivienne Westwood is now recognised as a global brand and Westwood herself as one of the most influential fashion designers, and activists, in the world today.