So often during times of crisis the question on our lips is, “Well, what can we do to help?” …right? Well, one possible answer to that probing question is that we we can support these organisations listed below, through donations or by volunteering if we can. These pioneers under our spotlight have been loud defenders of the most vulnerable groups ,and during these challenging times continue to be a voice for change. They create conscience and pressure governments and brands to do right by those without a platform. You can learn how to help these organisations on each of their websites above. The situation for garment workers around the world during the COVID-19 pandemic, is dire. And in the face of a growing number of garment and accessory workers being left stranded, many industry bodies are calling for action. Whether bringing attention to the current situation, or lobbying for governments and brands to take action, a number of organisations are emerging as a voice for the voiceless in this time of need. Take a look at our list below of some of the most impactful ones…

We have pulled together a list of 7 organisations working tirelessly to elevate the existence of garment workers around the world, and help create a better immediate present. At the frontlines of the fight for a more ethical industry for some time, these organisations have doubled up their efforts in these tough times, with a focus on humane supply chains, exposing thoughtless practices and exercising pressure for major actors to make things right as soon as possible. The digital platforms listed below are currently some of the best for those seeking up-to-the-minute news about the impact of COVID-19 on garment workers and vulnerable groups in the fashion industry. Many are actively lobbying brands and governments, to step up and take responsibility for workers and citizens around the world, particularly in Southeast Asia, Africa, Central America, and Eastern Europe. 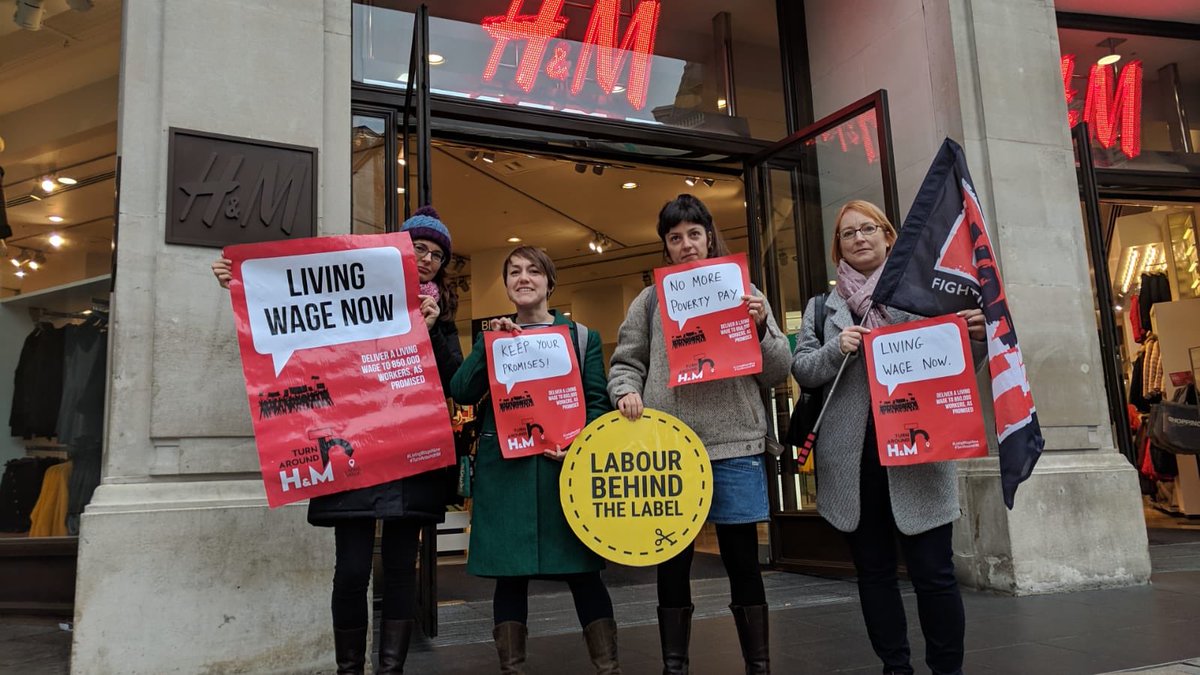 A global network operating since 1989, Clean Clothes is probably the oldest and most respected organisation focused on the improvement of the fashion industry. Clean Clothes pushes awareness of the dire conditions in supply chains, with a focus on garment workers’ fundamental rights. Clean Clothes educate and mobilise consumers to make more conscious fashion purchases, lobby companies and governments to improve conditions, and offer direct guidance and education for workers around the world about their rights.

The Clean Clothes mission works alongside unions, raises awareness, explores and pushes for fairer legislation, and also develops and sustains a network of workers throughout the world. We are in awe.

Fair Wear Foundation wants to see a world where the garment industry supports workers in realising their rights to safe, dignified, properly paid employment. Fair Wear focus on garment production, specifically sewing, cutting and trimming processes – the most labour intensive parts of the supply chain. Fair Wear works with 130 member brands, who are committed to finding a fairer way to make clothes. It engages directly with factories, trade unions, NGOs and governments to find answers to problems others think are unsolvable.

Fair Wear started back in 1999 when the FNV, a Dutch trade union, and the Clean Clothes Campaign, an advocacy group for garment workers, got together to improve labour conditions in the garment industry. Today, Fair Wear has a staff of more than 50 employees working closely with some 130 member brands towards a fairer and more ethical fashion industry.

More and more consumers are looking for ethical and sustainable clothing brands committed to fair business practices, but how can a customer trust whether a company’s claims to fair practices are true? The only way to be sure is through third-party checks. To gain real insight into our member brands’ performance, Fair Wear conduct checks at three levels: at the brand level to see which current business practices and management decisions are likely to create problems down the line at the factory level and which are helping support better labour conditions; at the factories to inspect working conditions; and lastly, by hearing directly from the garment workers. These thorough checks boost credibility for our member brands and provide the starting point for real change to occur.

A Los Angeles-based workers’ rights organisation, The Garment Worker Center looks to eliminate sweatshop labour in the city. While many assume working conditions in developed nations are frequently superior, there is actually still plenty of work to be done. In LA, there are over 45,000 garment employees, a large percentage of whom are young Latin American immigrant mothers on a low income and lacking a supportive infrastructure. Only 4% of the women in this group have access to free or low-cost preschool or Head Start programmes.

The Garment Worker Center educates and develops leaders to engage in dialogue with brands, manufacturers, and factory owners, and to push for the enforcement of labour legislation. They also prioritise marginalised groups within the LA garment industry, namely migrants, women of colour and their families. As their work is mostly directed towards the Latino migrant worker community, the information on their page can be found in both English and Spanish

The Centre for Sustainable Fashion, part of the University of the Arts in London was created in 2008. It began with a focus on human and ecological resilience in design as an art and business and has since evolved to become a diverse community of designers, educators, communicators, and researchers dedicated to creating well-founded and highly-regarded research. The Centre is known for setting agendas for industry players, and crafting relevant curriculum on sustainable fashion.

The CSF was created to challenge the consumption status quo, one which deems excessive and mindless consumption acceptable, and creates a disconnection between the clothing in our wardrobes and the conditions in which they were made.

Part of the fight for a more ethical fashion industry has to begin in the classrooms, warning the next generations of industry leaders and creators about the dangers inherent within current conditions. Crafting inspiring alternatives to current supply chains is an essential part of building an improved industry, which makes think tanks like the CSF even more relevant.

The Solidaridad Network is one of the oldest NGOs on this list. It was founded back in 1969 by a group of Catholic bishops in the Netherlands, as a campaign to provide developmental aid to Latin America. With a starting goal to connect different players in the global supply chain in order to build a more sustainable production framework going forward. In the 50 years since its creation, Solidaridad has crafted a worldwide network with presence at each step of the supply chain. With work focused mostly on the private sector, The Solidaridad Network is well aware of the importance and impact of civil organisations and individual governments, reaching out to them on an ad hoc basis.

After the economic recessions of the late 20th century, Solidaridad directed its attention towards the communion between economic development and social rights. In the time since, their regional centres around the world have worked towards a common goal: Fair Trade. Fashion is only one of a myriad of industries Solidaridad looks to improve by empowering small farmers, women, and minorities who are low on means but high on potential.

Labour Behind the Label

Labour Behind the Label is an organisation dedicated exclusively to improving the lives of workers within the fashion industry. Currently it is the only UK campaign group focused entirely on this essential subject, representing the Clean Clothes Campaign in the country.

Since 2001, Labour Behind the Label has researched, lobbied, and raised awareness about the working conditions of garment factories around the world. Most importantly, their heavy campaigning was one of the critical drivers behind milestones like British retailers signing the ‘Bangladesh Accord on Fire and Building Safety’. They have also worked alongside workers from garment-making countries like Cambodia and Indonesia to shine a light on their working conditions.

This campaign seeks to improve labour conditions through five active points. First of all, by supporting worker demands, and connecting with brands during harsh times to improve critical situations. Second, building solidarity in consumers by speaking out about garment workers’ conditions, touring and sharing stories, and numbers of their struggles. Third, by holding brands and governments accountable, whilst using legal and voluntary measures to see that rights are respected. Fourth up, thoroughly researching brands’ words versus their actions – forcing accountability, partnering with academia, journalists, and global policymakers. And, fifth, actively campaigning and lobbying towards a brighter future for these people. In the current crisis, Labour Behind the Label has been one of the most vocally critical actors calling for brands to step up and improve the lives of their workers and contractors during this global pandemic.

With a focus on ending poverty as a whole, CARE International is one of the greatest defenders of workers’ rights in all areas, including the fashion industry. The first form of this NGO, the Cooperative for American Remittances to Europe, was set up by a conjunction of charities with labour, religious, and civil backgrounds. It appeared in the days after WWII, when the first CARE package full of relief supplies arrived in France. The organisation has steadily morphed into something else over time, going beyond the recovery of Europe towards countries with deeply rooted social inequalities in regions like Asia, Latin America, and Africa.

CARE has fought for equal global industrialisation for many decades, and currently has a presence in 95 countries, directly reaching 56 million people through nearly a thousand projects and indirectly working towards the improvement of 340 million lives around the world. All thanks to their lobbying, advocacy, and innovation.

One of their most exceptional programmes is their Women’s Economic Empowerment initiative, which empowers women in the workplace. Women and girls are often driving forces in sustainable change, yet their labour conditions are frequently worse than their male counterparts, who also make up 60% -75% more, and have more economic opportunities due to legislation in many countries. For over 20 years, CARE has worked in Cambodia’s garment industry towards occupational health and safety, ensuring that the most vulnerable workers including young female migrants have protections against workplace harassment in the country’s factories. In the early days of April, CARE released $1 million worth of flexible funds to 17 high-risk countries to fight the effects of COVID-19.